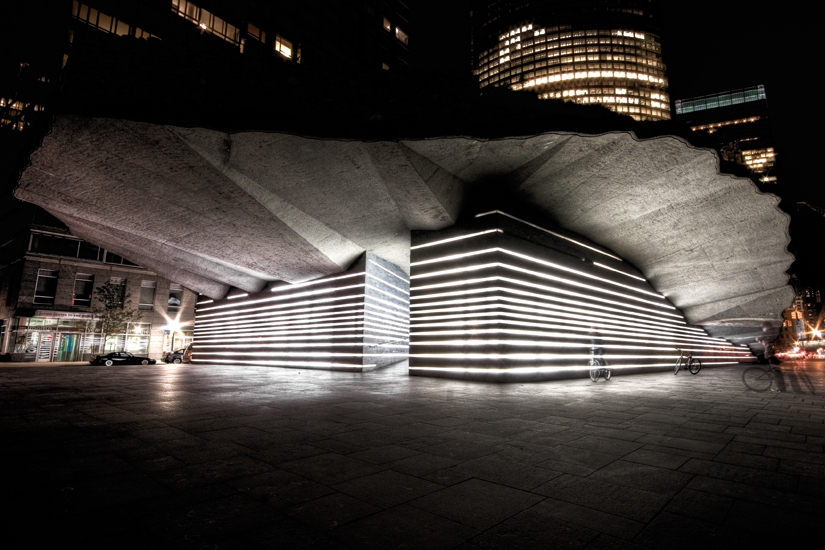 “The experience of the place suddenly doubles in significance: both trauma and hope, departure and arrival, exile and rescue”The New Yorker;

Visionary artist Brian Tolle’s Irish Hunger Memorial offers a contemplative space amid the fever of downtown Manhattan, replicating an Irish cottage setting during the Great Irish Famine of 1845-1852. The winner of an architectural competition to design the memorial, Tolle collaborated with both Juergen Riehm and David Piscuskas of 1100 Architects, and renowned landscape architect Gail Wittwer-Laird, to bring his concept  to life. His commemorative work depicts an Irish hillside, featuring indigenous Irish vegetation, fallow potato furrows, stone walls and an abandoned famine-era cottage, transported from the village of Attymass, Co. Mayo and reconstructed stone by stone on site in New York.

Fittingly, Irish Blue Limestone was elected as the primary material for the plaza and the plinth on which the monument is elevated. Strips of limestone cladding with its characteristic fossils, chosen from Kilkenny Limestone’s Old Leighlin quarry by Irish Natural Stone comprise the entrance passageway. These are intermittently illuminated with glass bands inscribed with information about the Irish famine and the ongoing problem of Third World famine worldwide. The passageway tunnels upwards to reveal the desolate ruins of the cottage on its impoverished plot of land, “culminating in a hilltop with sweeping views of Ellis Island and the Statue of Liberty.”

One of the most unusual, beautiful and poignant memorials ever constructed has now been repaired, renovated, and reopened to the public.

The Irish Hunger Memorial, in Battery Park City, New York, was originally opened in 2002.  Unfortunately, it soon ran into problems; water damage threatened the electrical installations, and it was clear that major renovations would be needed.

There was no question of abandoning the memorial.  It is intended to honour those who died in the great Irish famine of 1845-1852, at the same time inviting visitors to consider the problems of famine and hunger that face the world today.  Hundreds of thousands of Irish men and women came to the USA to escape the poverty and desperation that faced them in Ireland at that time, and as many as a million who remained in Ireland died.

Brian Tolle, one of the most visionary of the creative artists working today, won the competition to design the new memorial, and he collaborated with Juergen Riehm and David Piscuskas of 1100 Architects and landscape architect Gail Wittwer-Laird in the design and construction of the memorial.

Set on a cantilevered base constructed of glass and fossil-bed Irish Blue Limestone, the memorial is a brilliant depiction of an Irish hillside, with stone walls, an abandoned cottage, and potato furrows, lying, sadly, fallow among the indigenous Irish vegetation.  The cottage itself was brought over from County Mayo and painstakingly reconstructed, stone by stone, on site.

It was only fitting that the stonework for the plaza and the plinth should have come from Ireland, too, and Irish Natural Stone chose Irish Blue Limestone from Kilkenny Limestone’s Old Leighlin quarry.  The flamed finish strips that comprise much of the cladding and the paving in the entrance passageway show the characteristic oyster fossils which give the appearance of depth that is almost unique.

The hilltop of the memorial gives a standpoint for a vista that takes in Ellis Island, where so many desperate people arrived with the beginnings of new hope in their hearts, and the Statue of Liberty that was erected later in the century to greet migrants, not only from Ireland, but from all over the Old World.

The memorial is attracting visitors from near and far, native New Yorkers, tourists, and the descendants of those first Irish migrants.  Tolle gives them a glimpse into history, a view of an old country in one of its most dreadful times.  Ireland gives them the living ecosystem in the grass and flowers that lend grace and colour to the old hillside set in a new world, and the firm foundation upon which it now stands.