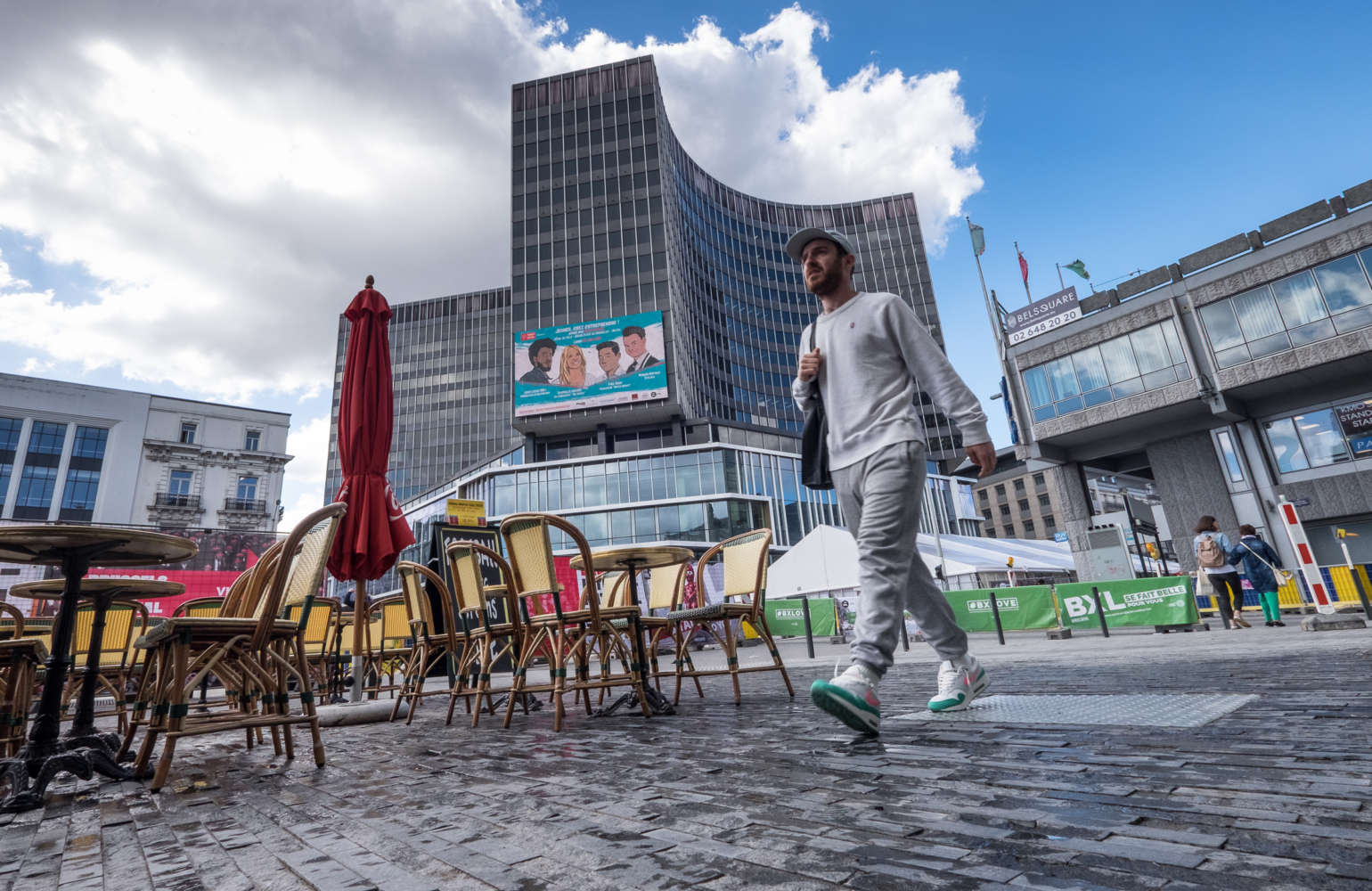 In what may well be the most ambitious project of its kind in Europe, Brussels is extending its ‘pedestrian only’ area in the city centre from an already considerable twenty-eight hectares to fifty, to include large parts of the Boulevard Anspach, the Place de Brouckère, the Place de la Bourse, and the Place Fontainas.

These are already magnets for tourists, who visit the city because of its history and the beauty of its architecture, and whose foreign currency supports a wide range of businesses.  Turning them into car-free zones, with cleaner air and the virtual elimination of traffic danger, will certainly enhance the attraction.

The planning, which started in 2014, has been meticulous; there is no room for error in a project this size.

Irish Blue Limestone was chosen for more than thirty-six thousand square metres of paving, and at least three thousand metres of kerbing.

It was not chosen for its beauty alone, although this is a factor that must have played an important part.  The Belgian authorities demand very high standards for the finished products used in their construction industries, and Kilkenny Limestone met these standards, both in the traceability of the stone and in the environmental management systems it employs.

Value for money and durability is also vitally important, and the financial planning that went into the Brussels reconstruction work took this into account.  There is not only the initial cost of the stone to be considered.  It is easy to work? Can it be cut and shaped to the range of styles that are needed in such a project? Are the finishes to the stone available in different varieties?

Yes, it is easy to work, as many world-famous sculptors have attested, and as for the finishes, the planners of Brussels need have no fear.  Sawn, Classic, Hatch, Texture, Vintage or Showcase, almost everyone with its various sub-divisions of polished, honed, flamed, chiselled, and other varieties, the architects and designers found exactly what they needed for each of the public spaces they were planning, and they chose flamed, split, bush-hammered and diamond-sawn.

Pedestrian areas in Western Europe, with its icy winters and its sudden rainstorms, need non-slip surfaces on kerbs and areas adjacent to pedestrian crossings, and Brussels has chosen corduroy and blister finishes.

Most of the work will have been completed by the end of this year.  When the new area has been cleared of site workings and vehicles, Brussels will begin to enjoy its new public spaces, which will be cleaner, quieter, safer, and more beautiful.

Public spaces in which Irish Blue Limestone will have played an important part.

The city of Brussels has recently dramatically expanded its pedestrian-only area.

Near its historical ‘Grand Place’ are the big central Boulevarts between Place de la Brouckère and Place Fontainas. Including also ‘Place de la Bourse’ with its oldest stock market in the world, this area is now part of the inner city pedestrian zone.

In 2015 a projects was started for a complete make-over of the area, that involves over 36,000 m2 of street paving.

The ambition was to create a natural realm using culturally embedded materials. After a selection process of 2 years that involved not only esthetical references but also a thourough technical assessment, in August 2017 Kilkenny Limestone was awarded the contract for supply of all paving materials.

The project is still on-going and expected to be finish mid 2020.