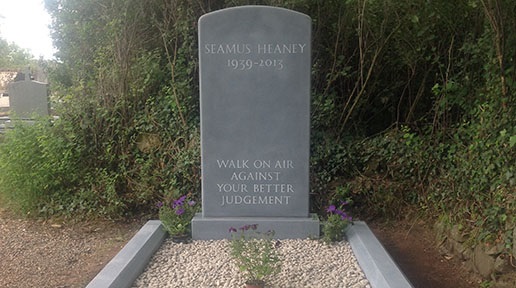 The inscription on Seamus Heaney’s gravestone, which stands in the cemetery adjoining St Mary’s parish church in Bellaghy, the town where he spent much of his childhood, speaks as much of the man himself as it does of his poetry.  The words are clear, and beautiful, as is the craftsmanship that set them in the stone.

Kilkenny Blue Limestone is an entirely appropriate material for one of the greatest poets of his age.  Michael Hoy was entrusted with the work, and the inscription, a line from his poem “The Gravel Walks” formed part of his 1995 Nobel Prize acceptance speech.

“Walk on air against your better judgement.”

The beautiful stone is marked by fossils, faint but clear against the blue-grey background, understated, yet meriting close attention, which might also stand for Heaney’s work, apparently so simple, and yet with deep meanings that are not hidden from those who choose to look.  Heaney himself, in his 1979 poem “Oysters” mentions limestone, as a man who observed, watched and loved the natural landscape of his island could not fail to do.

“We had driven to that coast

Through flowers and limestone

And there we were, toasting friendship,

Laying down a perfect memory …”

Heaney did not spend all his life in Ireland.  From 1981 to 1997 he was a professor at Harvard in the USA, and he was also its Poet in Residence until 2006.  For much of that time, he was also the Professor of Poetry in Oxford, although that position did not require him to live in the city.   However, he was Irish to his very bones, loving his native land with a clear-sightedness that took account of what he saw as its failings, as well as its strength and beauty.  He lived in dangerous times, and although the path he trod was careful, it was always brave, speaking his truth quietly, watchful, observant and clear-sighted.

His grave is visited by hundreds of people who love his work.  As they look at the simple slab of Irish Blue Limestone and read the words for which he is perhaps most famous, it must be clear to them that here lies a poet who, in life, in death, and forever, is Irish. 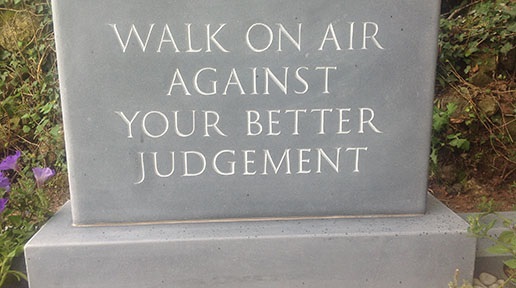 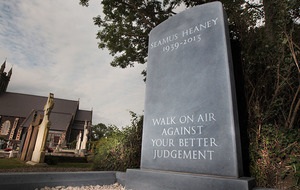