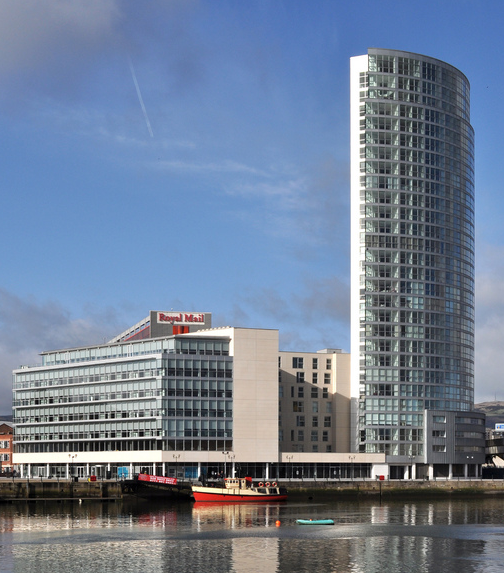 The Obel Tower, the tallest building not only in Belfast but also in Ireland, was one of the most spectacular victims of the property bubble of 2009.

When it was first opened in 2005, it had the most expensive per square foot average price in Belfast.  Then prices crashed, and took with them the original owners, Donegall Quays Ltd.  The Obel Tower was widely seen as a white elephant.  Few could afford the cost of the apartments, and those who could did not want to live in a building that was half empty.

Now, The Obel Tower has come to life again.  It was taken over by a new company, the redevelopment work was restarted, and the occupancy rates of the private tenancy area have risen from 50% to 95%.

This rejuvenation took courage, skill and imagination, and they have been rewarded.  Now, it is not only its height that is attracting the attention and admiration of the citizens of the city, and its increasing numbers of visitors.  At ground level, the regeneration that was carried out has also received positive comments.

1,300 square metres of paving has been laid in the new hard landscaping scheme, and the lovely natural stone has a Flamed finish.  The slabs, which are 60 mm thick, are of various sizes, allowing an attractive pattern to be designed and completed.

Luckily for those entrusted with this work, the Irish Blue Limestone only had to travel a short distance from the quarry and the work site to Belfast, which gave them an advantage over those contractors who also chose Irish limestone for cities across mainland Europe, and who still regarded the stone as representing good value for money.

Natural stone is increasing in popularity as a building material, not only because of its beauty, but also because it is demonstrating, time after time, that it is economical, and that its carbon footprint is far smaller than that of comparable artificial stone.

Irish Blue Limestone is durable.  It can still be seen, with the chisel marks intact, in Neolithic burial chambers! It is, as sculptors from around the world can attest, easy to work, and it can take a wide range of finishes, from the rough, non-slip surfaces offered by flamed, hammered or chiselled, to the almost translucent black gleam of highly polished stone, where the oyster fossils reflect the light, and give an appearance of depth that cannot be matched by any other stone.

Why, in Ireland, would you look for anything other than your own stone?