For the Low Countries of Western Europe, sea defences have been an essential part of life for centuries.  Dikes have been constructed for nearly a thousand years, and the expertise in coastal development engineering to be found today in Belgium and Holland is second to none.  Life depends upon the sea defences; huge tracts of land lying below sea level, and the population density in these areas is high.

Most of the original work was carried out under the auspices of the monasteries, which, in the thirteenth century, had the land, the money and the manpower to turn the makeshift system of piecemeal dikes into a unified sea wall.  At this time, earth dikes were faced with a protective layer of seaweed, pinned with wooden poles.  As the seaweed rotted, it was compressed by the action of the waves, and this was very effective; sea walls built in this way required little maintenance.  A less successful structure consisted of vertical timber walls backed by earth, but these were easily damaged by storms.

The arrival of shipworm in the eighteenth century put an end to wooden construction and stone became the material of  choice for sea defences.

Irish Blue Limestone was the choice of the engineers of Ostend for a major maintenance project on the sea wall.  In order to withstand increasing levels of erosion, and the hot and violent weather that climate change is bringing, Ostend was looking for a durable stone to form the base of the sea defences.  The city of Ostend is below sea level and if the sea was to breach the seawall the city would be flooded very quickly.

More than a hundred truckloads of split-face limestone were sent to Ostend, and it was used to secure the line of defence against the storms and the high seas those storms bring in their wake.  The contractor for the project, Depret, needed four thousand square metres of stone, and their supplier, Natuursteen Zagerii, looked to Irish Blue Limestone and needed to look no further.  The stone is ideal for the purpose, the rough surface holding its covering of sand far better than any artificial materials could do, and the suppliers complied with all the high standards and the qualifications demanded for construction work in Belgium.

The coastline of The Low Countries is long, and it is vulnerable.  There is likely to be an increasing demand for a durable natural stone to rebuild, reinforce and repair the sea defences.  Ostend will not be the last city to look to Ireland and to ask for the best natural stone that can be found. 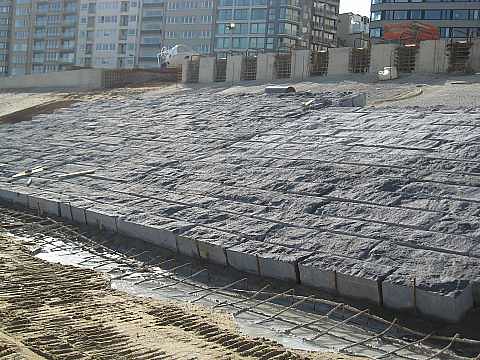