McKeon Stone features prominently in a garden which has won a Gold Award at the 2018 Bloom Show in Phoenix Park, Ireland’s largest annual horticultural show.

A Future Pedestrian and Cycle Network

The Institute of Technology Blanchardstown Horticulture Department, working with the Parks and Green Infrastructure Division of Fingal County Council, designed and created the large show garden, which represents the Fingal Way, a planned future pedestrian and cycling network linking communities throughout Fingal.

The hard landscape elements of the garden, which were constructed by participants in the Local Training Initiative (LTI) run by Fingal County Council, include a substantial quantity of McKeon Stone, such as the large natural limestone boulders throughout the garden and  some  gabions of limestone rock which are used as garden walls.  The gabions have openings to provide a habitat for pollinator insects.  McKeon Stone also suppled cut stone for the garden’s Kilkenny Blue limestone paving  and steps.

The garden, named ‘The Greener Way for Fingal’ was designed by landscape designer Jane Corkery.  The theme is sustainability, and the design illustrates the need for open spaces which function not just as recreational areas but also as natural play areas, wildlife habitats, pedestrian and cycle routes and sustainable urban drainage systems. A cycle path is a feature of the garden, evoking a journey through elements of the county’s landscape. 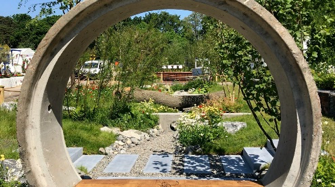 A striking feature of the garden is a section of a large drainage pipe which has been repurposed as a seat.  In keeping with the recycling theme, many of the garden features will be reused for landscaping in the ground of Bremore Castle, the Balbriggan home of the Dublin and Dun Laoghaire Education and Training Board, where the participating Local Training Initiative is based.