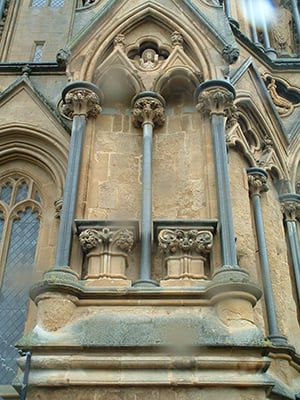 We all know that stone is durable, it’s been the building material of choice throughout history.  Archaeological sites around the world feature building made of stone that have endured for thousands of years.  Here at McKeon Stone, we source our famous blue limestone from our own limestone quarry in Threecastles, Kilkenny and cut and craft it to each of our customer’s unique designs.  We’ve been doing this since 1950 but the sought-after blue limestone from Threecastles quarry has been a popular choice since time immemorial because it stands the test of time.

Wells Cathedral in Somerset was originally built between 1175 and 1490 to replace an early church built on the same site in 705.  The Cathedral fell into disrepair during the time of Cromwell and then restored in the 17th Century but suffered damage during the Monmouth Rebellion of 1685 when Puritan soldiers damaged the west front.

By the time Queen Victoria came to the throne, Wells Cathedral was in serious need of a major restoration project which was undertaken by the renowned architect, Anthony Salvin who enjoyed a reputation as an expert on medieval buildings, restoring castles and country houses for England’s elite.  During the 1870s galleries that had been installed during the 16th Century were fitted with stone canopies, whilst the medieval stone pulpitum screen was extended in the centre to support a new organ and columns of Kilkenny Limestone from Threecastles quarry were inserted to the façade of the Cathedral where their durability guaranteed that they would robustly withstand weathering conditions.

Limestone has been used in so many of the landmark buildings around the world, including the Great Pyramid at Giza which was the tallest man-made structure on the planet for more than 3,800 years, demonstrating just how long limestone endures.

Choosing Kilkenny Limestone from Threecastles quarry for the restoration work at Wells Cathedral was a wise choice, considering just how reliable and impervious this type of stone is, providing a permanent and lasting solution to ensure that Wells Cathedral lives on into the future.