The McKeon Stone workshop at Stradbally was the location for the carving of limestone panels which were erected as a memorial to the 1916 Rising in Lusk, County Dublin.

Lettering on the Memorial includes the names of all the men and women of Lusk and its neighbouring towns and villages who rallied during the Easter Rising of 1916. Also carved on the panels is the complete text of the 1916 Proclamation – over five hundred words. This large project was undertaken by McKeon Stone craftsmen to a design by Balazs Keresztury of MCOH Architects, and was erected by Michael Bracken of Stenstone. 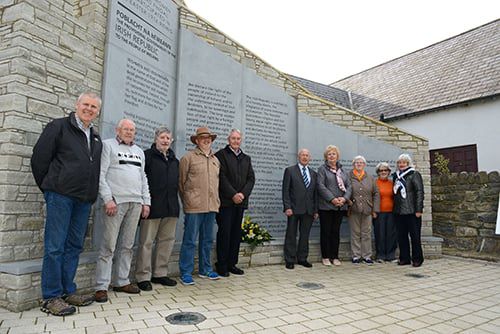 The Memorial stands seven feet high and is expected to become a local landmark in the village of Lusk, which has historic status as the home of Thomas Ashe (Tomás Pádraig Ághas), who commanded the Fingal battalion (5th battalion) of the Irish Volunteer during the 1916 Rising. Thomas Ashe is himself commemorated at Lusk with a statue, also carved from McKeon Stone limestone. 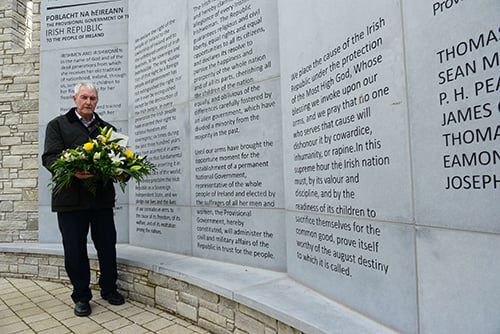 The Monument was unveiled in a ceremony in September 1916 by the Mayor of Fingal, Cllr Darragh Butler. The Chair of Lusk Community Council, Cllr. Brian Arnold, told the crowd that “1916 was a time when ordinary people from our community went on to do extraordinary things in the national interest”

Professionalism and Attention to Detail

Ernie Donnelly of Lusk Community Council, which commissioned the Memorial, wrote:“We would like to commend the staff at McKeon Stone who provided significant advice during the design phase of the project, and their professionalism and attention to detail in ensuring the accurate transcription of this seminal document onto the limestone panels was exceptional.”